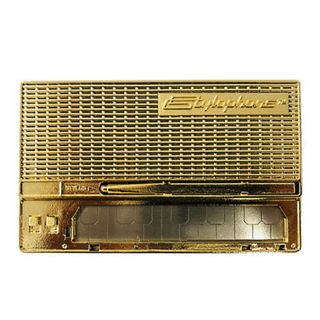 I have wonderful news! Just over 3 months ago, I submitted a song called Approach Me Like A Lion for a global competition set up by Dubreq, makers of the Stylophone, and have just been informed that of all the entrants, I have been crowned the winner! Along with the prestige of success and any exposure it may bring, I shall soon be receiving the entire collection of Dubreq instruments including a gold plated Stylophone (only one in the world) and a Stylophone S-2 (I have been eyeing this up for years but could never justify buying it).

Truth be told, I always felt that I was in with a strong chance of winning. I know that sounds abominable but I had a gut feeling I couldn’t shake. Apparently an ancestor of mine from the Scottish Black Isles had the gift of second sight so perhaps some of that was passed on to me… Despite this deep-seated belief, being informed of my triumph has blown my mind – I am delighted! Of course, getting a box full of crazy instruments for free is fantastic, but in all honesty, what means more to me is the stuff going on that you can’t see or touch, like the thumbs up from Dubreq and their guest judge Tony Visconti, record producer extraordinaire. With his acclaimed work including a decades-long partnership with David Bowie, to have such a giant smile down at my work means the world to me…

Capturing Approach Me Like A Lion was a joy. Entrants were tasked to write a piece of music lasting no longer than two minutes, in which a Stylophone product (there are a few different models) was the main feature. Having only just received a Stylophone GEN X-1 for Christmas six months prior, I saw this as a good opportunity to seriously explore my new synth. Moreover, working within Dubreq’s tight deadline fostered laser-like focus. Knowing that the Stylophone had to take centre stage, I moved into unfamiliar areas of arrangement and chose to minimise the density of my lyrics to avoid drawing attention too far from the synthesiser. Having such a small time frame, ideas were brought in swiftly and crescendos climbed rapidly. On top of this, I made sure I didn’t tamper with its unique sound much in post production to maintain the Stylophone’s integrity. Overall, I allowed myself to fully rely on an instrument that many would write off as a toy. For me, this represents the truth about creation: it doesn’t matter what you are using to make art, but how you use what you have.

With time very much against me, I decided to not only record the track, but also shoot a video for it. My thinking was “this little song needs a home; it probably won’t feature on any record as it has been fully realised in total isolation, so I need to give it some kind of anchor in this world.” A video seemed like the perfect idea, and on the 22nd of July, Approach Me Like A Lion was uploaded to Youtube.

I am so proud of how far Approach Me Like A Lion has travelled. What began as a scratchy demo shouted into my phone as I walked along a busy road has morphed into a fully fleshed chunk of electro-pop in a matter of frenetic weeks. Winning the competition is truly fantastic but the real prize is this song…

Thank you all for the lovely messages of support,
Thank you Dubreq and Tony Visconti,
Love
Oliver